Today, September 3, the longest stage of the Pyrenees Stage Run has passed, with 47.5km of course and a positive drop of 2.600m. The participants ran from Puigcerdà to Encamp, entering Andorra through the spectacular Madriu-Perafita-Claror Valley (World Heritage by UNESCO). It was a very hot day: the constant presence of the Sun has made the stage harder and, as a result, two teams have retired.

In women’s category, the first ones were “Deeside Ladies”, a team formed by Katie Henderson and Samantha Rendall, with a time of 8h38min. In second place, with 9h6min, “Deeside Divas”, with Sarah Dunn and Ros Baxter. And the third team in crossing the finish line was the one formed by Melissa Witteveen and Natura Richardson, with a time of 10h14min.

In the men’s category, the first ones to reach the finish line were Andre Purschke and Matthias Dippacher, team “Dynafit Team” with a time of 5h59min. At 6h30min. Alex Urbina and Javi Pons arrived, the “Sphere Pro Nutritape”; and in third place the “Trcarestacampbasegrimpacims” team, formed by Michael Henderick and Jordi Delgado, arrived with a time of 6h36min.

Finally, the results in the mixed category were as follows: first, the “Monkazelle”, formed by Michaell Brent and Emily Sullivan, with a time of 7h45min.; second, the “High and low up and down”, formed by Christoph and Anne Gerlach, with a time of 7h49min; and third parties, with 8h03min, the “Tortilla & Burrito”, team composed of Tara Bassili and Martin Daignault.

After the third stage, and with four more stage to run, the first classifieds of the Pyrenees Stage Run 2019 are: in female category, “Deeside Ladies” (Katie Henderson and Samantha Rendall), in men’s category, “Team Dynafit” (Andre Purschke and Matthias Dippacher); and, in mixed teams, the first in the classification is “High and low up and down” (Christoph Bellings and Anne Gerlach).

Tomorrow, the fourth stage of the PSR 2019 is the shortest in the entire race: 20km and 1,900m of positive difference across the valleys of Andorra d’Encamp in Arinsal. 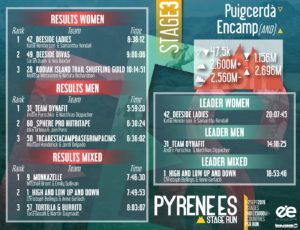