A step from the final goal to Salardú

The winners of the stage have been the team “Deeside Ladies”, with Katie Henderson and Samantha Rendall, with a time of 4h44min. In second position, Sarah Dunn and Ros Baxter (“Desside Divas”), with 5h30min. And third team on arrival were Melissa Witteveen and Natura Richardosn (“Kodiak Island Trail Shuffling Guild”), with 6h9min.

The first men team to cross the goal was “Team Dynafit” with 3h13min, consisting of tAndré Purschke and Matthias Dippacher. The second, “Trcarestacampbasegrimpacims” composed by Michael Henderick and Jordi Delgado, did it at 3h19min and, only 2 seconds later, the third team arrived: “Matagerri Team”, by Jose Luis Valle and Jordi Marco.

Finally, in the category of mixed teams, the first ones were Christoph Bellings and Anne Gerlach (“High and low up and down”), with a time of 4h25min. The team that arrived second to the finish line, with 4h29min, was formed by Emily Sullivan and Brent Mitchell, “Monkazelle”; and the third team was Tara Bassili and Martin Daignault, “Tortilla y Burrito”, with 4h32min.

Tomorrow will be the lastest stage to finalize the PSR2019 and the ranking of the general classification in the female and male category seems clear: if there is no surpirses, “Deeside Ladies” and “Team Dynafit” will finish first,. But in the category of mixed teams, although it leads the classification “High and low up and down”, between the first three teams there is only a difference of 17 minutes. Therefore, there is a lot of competition between the teams and the stage of tomorrow will be very decisive.

The seventh and last stage of the PSR will end Salardú tomorrow, in the Vall d’Aran. 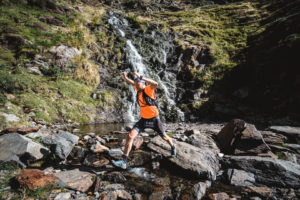 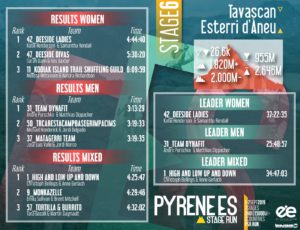